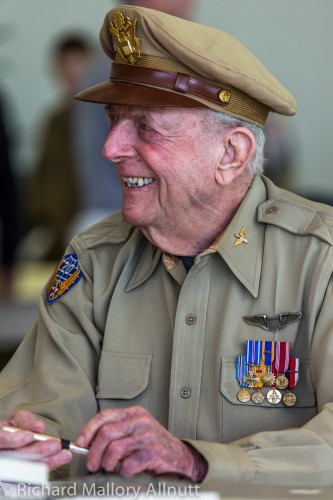 Captain Jerry Yellin served in WWII between 1941 and 1945 in the Army Air Corps. Yellin enlisted two months after the bombing of Pearl Harbor on his 18th Birthday. After graduating from Luke Air Field as a fighter pilot in August of 1943, he spent the remainder of the war flying P-40, P-47 and P-51 combat missions in the Pacific with the 78th Fighter Squadron.

On March 7, 1945 the then Lieutenant Yellin landed his P-51 on Iwo Jima, shortly after the Marines had captured the first airfield on the island. The 78th Fighter Squadron strafed and bombed the Japanese defenders as the Marines battled to take control of the remainder of the island.

He participated in the first land based fighter mission over Japan on April 7, 1945, and also has the unique distinction of having flown the final combat mission of World War II on August 14, 1945 – the day the war ended. On that mission, his wing-man, Phillip Schlamberg, was the last man killed in a combat mission in WWII.

After the war ended, Jerry struggled with severe undiagnosed PTSD. He always wondered why he survived, while so many of his comrades died during the war.

“Then it was over. One day a fighter pilot, the next a civilian. No buddies, no airplane, nothing to hold on to, and no one to talk to. Life, as it was for me from 1945 to 1975 was empty. The highs I had experienced in combat became the lows of daily living. I had absolutely no connection to my parents, my sister, my relatives, or my friends. I listened to some of the guys I knew talk about their experiences in combat and I knew they had never been in a battle let alone a war zone. No one that I knew who had seen their friends die could talk about it. The Army Air Corps had trained me and prepared me to fly combat missions, but there was no training on how to fit into society when the war was over and I stopped flying. I was not able to find any contentment, any reason to succeed, any connection to anyone that had meaning or value. I was depressed, unhappy, and lonely even though I was surrounded by a loving wife and four sons. That feeling of disconnect, lack of emotions, restlessness, empty feeling of hopelessness lasted until 1975.

In 1975, I learned a technique called Transcendental Meditation (TM). In just a few months life became meaningful to me and now, at 91 years of living, I can say that this meditation has brought me peace and contentment. In 1988, my youngest son married the daughter of a Japanese Kamikaze pilot, which took me from hatred to love. I have three Japanese grandchildren. I’d like their contemporaries to know that my grandchildren’s grandparents served their countries with honor.  No matter what we learned about the Japanese, or what they learned about us. We are not what we believe — we are all human beings.”

Jerry Yellin is the award-winning author of four books, including Jerry’s Last Mission (previously titled, Of War and Weddings), The Blackened Canteen, The Resilient Warrior, and The Letter.

Jerry traveled the world sharing his story and helping to bring healing and hope to a new generation of veterans who are battling post-traumatic stress disorder (PTSD).

He aimed to help heal the wounds of war while dissolve the barriers and misunderstandings that bring us to the point of destroying ourselves.  He delivered an insightful glimpse into the life of a warrior from the perspective of a humble humanitarian.

“We are all the same in the eyes of Nature. Human Beings! We cannot continue to kill people because of what we believe. We need to join together as humans or we as humans will destroy our home, the Planet we all inhabit”

Jerry Yellin was willing to go whenever and wherever he was able to make a difference in people’s lives.   His story of peace and compassion was shaped by suffering and sacrifice.  He hoped that in sharing his story, others can find ways to forgive, unite, and avoid the atrocities of war.

“I have everything I need.  I don’t need anything else.  I have the time and the desire to do this.”

Click on the video below and hear one of Hollywood’s top stars, actress Scarlett Johansson, encourage the public to remember the contributions of our World War II generation.

On December 6, 1941, Jerry Yellin was 17 and had no idea where Pearl Harbor was. The next day changed his life forever, when he made up his mind to enlist in the Army on his 18th birthday to fight the Japanese. And that's what he did on February 15, 1942. In his later years he returned to Pearl Harbor many times to talk about his amazing story of war time bravery flying his P-51 in combat on Iwo Jima and in the skies over Japan, and remarkably, his reconciliation with the people and country who attacked the USA on December 7, 1941. In this video from December 6, 2016, he's at Pearl Harbor to participate in the Blackened Canteen Youth Symposium. Not many people know about the history of the Blackened Canteen. It's a moving true story that occurred in Japan during WW2 of bravery by the Japanese and Americans. Jerry helped keep the memory of that story alive and he wrote a historical fictional account of the event (and it's a great read available on Amazon). If he were still alive, I know he would want to be back at Pearl Harbor today, pouring bourbon from the Blackened Canteen and wishing for peace among the nations and people of the world. ... See MoreSee Less

www.pacificaviationmuseum.orgFollowed by the Blackened Canteen Ceremony on December 6, 2016 aboard the USS Arizona Memorial, a youth symposium was he...
View on Facebook
· Share

Before Jerry Yellin died in 2017 he co-founded an organization with a Vietnam veteran, Ed Schloeman. Operation Warrior Shield's (OWS) mission is to help veterans and first responders cope with PTSD. Originally focused on Transcendental Meditation, the organization has branched out to include other support programs. To help raise funds for the organization, OWS is auctioning a painting of Jerry taken from a photograph of him on Iwo Jima. The original photograph, in front of his P-51, the Dorrie R, showed him discussing fighter tactics with Danny Mathis, another P-51 pilot in the 78th Fighter Squadron on the island. Mathis was later killed in the Dorrie R. Jerry was grounded on a mission due to an impacted molar. Mathis flew the mission instead, in the Dorrie R, and never returned. However, the artist, Taty Alexa Horoshko, took the liberty to instead depict Phil Schlamberg, a 19 year old Jewish kid from Brooklyn. Schalmberg and Jerry flew the last mission of WW2, attacking Tokyo on August 14, 1945, not knowing that Japan had surrendered a few hours beforehand. On the return flight, Schlamberg's P-51 went into a dense cloud and never came out of it, presumably shot down. He was likely the last US soldier killed in WW2. After the war, Jerry visited the Brooklyn home of Schlamberg's family, where Phil's grief stricken mother told Jerry it should have been he who died and not her son. It was a wound he carried with him for the rest of his life. Please send me a message if you are interested in the painting or know someone who might be. Thank you. ... See MoreSee Less
View on Facebook
· Share

George Nolly is a former US Air Force and United Airline pilot turned podcaster who recently interviewed Louisa Merino about making the documentary Jerry's Last Mission. It's a touching and heartwarming interview about how she met Jerry Yellin and the 3 years she spent filming him in the USA and Japan, and the labor of love she devoted for almost 2 more years editing and bringing the film to light. Please have a listen and help spread the word about the documentary. ... See MoreSee Less

We spoke with Jerry Yellin in RFT Episode 052. “Jerry’s Last Mission” From Deadline: Directed by Louisa Merino (Managing to Win: The Story of Strat-O-Matic Baseball) and...
View on Facebook
· Share

On this date in 1945, the 78th fighter squadron flew their P-51s on their first Very Long Range mission from Iwo Jima to Japan, meeting up with and protecting B-29s from Japanese fighter planes and strafing targets below. Flying over 700 miles each way without radar across the Pacific Ocean, the VLR missions were extremely dangerous, with more planes lost due to bad weather than to enemy fire. Returning from the mission after 8 hours in flight, the exhausted pilots had to be lifted out of the cockpit by the ground crew. Captain Jerry Yellin poses in this picture with his squadron on that morning in 1945, which includes the father of actor Troy Evans.Jerry's Last Mission documentary is available on Apple TV/iTunes and book is available on Amazon. Please help spread the word. ... See MoreSee Less
View on Facebook
· Share

When this happens, it's usually because the owner only shared it with a small group of people, changed who can see it or it's been deleted.
View on Facebook
· Share