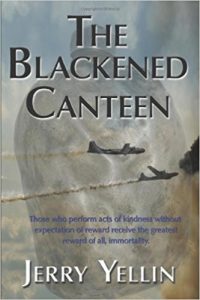 Inspiring a campaign for peace among Japanese and American citizens, and strengthening ties between the two countries. Having campaigned for peace for many years, this beautiful story strikes a deep chord with me. I hope it will become more widely known around the world and inspire other people too.” ~Imagine Peace, Yoko Ono “Jerry Yellin takes you from the terror of war to the everlasting hope of peace, in a unique story of World War II. -A human story like no other. God bless you, Dr. Sugano.” ~ John Colli, Nephew of Ken Colli from The Blackened Canteen “Words cannot express the true feelings of the heart when reading “The Blackened Canteen”. 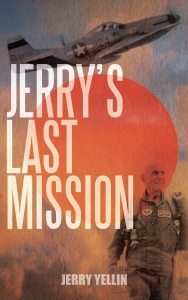 Jerry’s Last Mission (formerly titled, Of War and Weddings) is a moving and compelling true story of bitter wartime enemies who find peace through their children’s marriage. A shared destiny weaves its way into the lives of the Yellin and Yamakawa families as two former combatants end up healing the wounds of war and nurturing a legacy of freedom and understanding for the children of America and Japan. We experience Jerry Yellin’s remarkable life, from his childhood in New Jersey, to his enlistment into the Army on his 18th birthday two months after the attack on Pearl Harbor, to his war experiences as a fighter pilot who fought on Iwo Jima and who flew 19 dangerous very long range missions over Japan, to his struggles with Post Traumatic Stress Disorder, and the trepidation he encountered when later in his life his youngest son moves to Japan and wants to marry the daughter of a Japanese WWII pilot. We feel his joys, his loves, and his pains. We experience the process of healing as it occurs and are moved to discover that the legacy of these two fathers is an inheritance intended for us all. The book is available on Amazon. 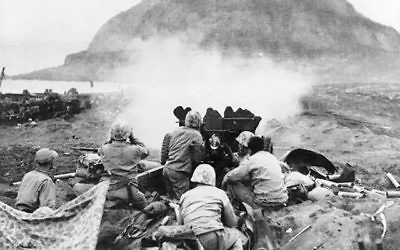 Jerry Yellin, who flew a combat mission over Japan in his plane Dorrie R on the day Emperor Hirohito surrendered, at Culpeper Regional Airport in Virginia in May 2015 for an observation of the 70th anniversary of V-E Day. Credit Saul Loeb/Agence France-Presse — Getty Images
When the Japanese bombed Pearl Harbor on Dec. 7, 1941, plunging the United States into World War II, Jerry Yellin was a teenager living with his family in Hillside, N.J.

Having been intrigued by flight since he was a youngster — he constructed planes modeled on World War I aircraft — he joined the Army Air Corps in February 1942, on his 18th birthday, and became a fighter pilot.

On Aug. 15, 1945 (Aug. 14 in the United States), Lieutenant Yellin was leading an attack on Japanese airfields by four P-51 Mustang fighters from his 78th Fighter Squadron, as American airstrikes on Japan continued even after the atomic bombings of Hiroshima and Nagasaki earlier that month.

In the days following the atomic raids, all aircraft pounding Japan were to receive a coded signal from their bases if a Japanese surrender came. If one did, they were to halt their missions and turn back.

Emperor Hirohito announced Japan’s surrender at noon local time on Aug. 15, just as Lieutenant Yellin, flying from his base on Iwo Jima, was leading his four-plane attack.

But as he told it years later, for some reason that he could never determine his planes did not receive the cease-fire message that had gone out to American aircraft at the time.

It was only when he returned to Iwo Jima some three hours after completing the mission that he learned the war had formally ended while he was still blasting away.

Mr. Yellin died on Thursday in Florida at 93. His death was announced by his son Steven.

In paying tribute to him, the Air Force’s chief of staff, Gen. David Goldfein, called him the fighter pilot “who flew the last combat mission of World War II.”

But for Mr. Yellin, the war had not truly ended. He was afflicted by what is now known as post-traumatic stress disorder, having witnessed the carnage on Iwo Jima and later having 16 members of his squadron killed on missions.

Iwo Jima was needed as a base for fighter planes that would escort long-range B-29 bombers based in the Mariana Islands while they raided Japan. It was conquered with a fearsome toll on both sides.

“Body parts were everywhere and the smell of death permeated the air,” Mr. Yellin recalled in a May 2014 interview with the Library of Congress for its Veterans History Project, telling of his first weeks on Iwo Jima after the Marines had seized its airstrips from the Japanese.

Mr. Yellin, who later flew 19 missions over Japan, was especially grieved by a very personal loss on that final raid of the war.

His wingman, Lt. Philip Schlamberg, a 19-year-old Brooklyn native he had helped mentor, never emerged from a cloud embankment that the four Mustangs of the 78th Squadron encountered upon crossing the coast of Japan en route home. Mr. Yellin speculated that he had been shot down by Japanese antiaircraft fire.

“Because of our common Jewish heritage and because he was one of our younger pilots, I had naturally taken Phil under my wing,” Mr. Yellin recalled in “The Last Fighter Pilot,” a biography written by Don Brown with Mr. Yellin’s collaboration and published this year.

Earlier in 1945, in another particularly searing episode, a less experienced pilot was lost on a mission to Japan while flying Mr. Yellin’s Mustang, which he had named Dorrie R for his girlfriend, whom he had met while training in California. The unit dentist had grounded him that day to carry out the urgent removal of painful wisdom teeth.

Mr. Yellin was discharged from the military in December 1945 as a captain and received the Distinguished Flying Cross.

And then his battles continued.

“I was angry,” he said in the Library of Congress interview. “I could go to college. I had no desire to do that. I couldn’t hold a job. I had many, many jobs. I was depressed. Every symptom that they now diagnose as post-traumatic stress disorder, I had.”

Mr. Yellin married Helene Schulman in 1949, and they began raising a family even while his emotional distress continued. It was not until he embraced Transcendental Meditation in 1975, at the suggestion of his wife, that he was able to alleviate his stress and find a productive life.

Jerome Yellin was born on Feb. 15, 1924, in Newark. After graduating from high school, he worked seven days a week in a steel mill to earn money for college. Then came Pearl Harbor Sunday.

In his later years he helped fellow veterans, from World War II and the wars that followed, in their efforts to overcome combat-related trauma.

Mr. Yellin and his wife, who died in 2015, had four sons, David, Steven, Michael and Robert. They survive him, as do six grandchildren and a sister, Maxine Giannini.

In 1983, when Mr. Yellin was a consultant to some banks in California, he was asked to visit Japan to speak about investments in real estate in the United States. He was reluctant to make the trip, having demonized the Japanese during the war. But his wife wanted to go, and when he got to Tokyo, he later said, he was impressed by the “well-dressed, well-mannered, beautiful-looking people.”

The Yellins sent their son Robert, a college senior at the time, to visit Japan in 1984. He loved the country and married a Japanese woman, Takako Yamakawa, four years later. The Yellins attended the wedding and made many subsequent visits to Japan to see the couple and their three children.

Takako’s father, Taro, had been a pilot in World War II. But Jerry Yellin and Taro Yamakawa found they could surmount the hatreds spawned by the war and, as Mr. Yellin once put it, “We became brothers, he and I.”

“I went from thinking a group of people were my enemy to finding my best friend,” Mr. Yellin told People magazine in 2017. “It’s a lesson to remember that at the end of the day we are all human and have so much love to give.”

Correction: December 26, 2017
An earlier version of this obituary misstated Mr. Yellin’s full given name. It was Jerome, not Jeffrey.